I yearned for the old house to be demolished. Wanting to take a sledge hammer to it myself, I needed it to be gone. For over 14 months the house sat there while it collected cobwebs and the next doors neighbour’s cat enjoyed the smorgasbord of rodents occupying the empty space. Ever since the tree cut through the house I never considered repairing it. There was no way I could have lived in the same place and be reminded every day of the devastation we went through.

The bitter sweet day comes around in a flash. Waking up early on this cool summers morning, I haven’t really slept yet spring out of bed, as if it were Christmas. The orange excavator has arrived, one of the largest yellow metal skips and machine operators are all ready to go on site, coffee in hand. Finding the best seat in the house, the kid’s trampoline, there I sit with my phone and camera charged up ready to capture the compelling moments.

While the steam off the morning cups of hot coffee are being blown, flashes of what it took to get us to this point come to mind. The windstorm, the tree landing on our home, the insurance claim, moving into temporary accommodation, the house collecting dust while we waited, the pain staking process, finally getting permission to touch our home and the preparation to get the house ready to be demolished.

I have spent the last three nights smashing tiles out of the bathroom, ripping up flooring, digging trenches for the electricity and wheeling out the old kitchen. I take this moment to look at the house one last time and breathe. Nothing much has changed inside those broken walls yet in contrast we have done a full 360, landing right back here ready to smash our house to pieces.

The engine starts churning and the moan of the arm moving into position has me on the edge of my seat. This is it. What we have been waiting 14 long months for. The arm of the boom levers towards the back decking while the claw of the grapple opens up with a clank, stretching it’s long fingers and picking up a post straight from the ground like a tooth pick, swinging it around till it hovers over the skip, boom echoes through the morning air as it drops to the bottom.

Everything stops and the driver emerges from behind the bin. Waving me over he yells “Would you like to have a go?” I jump to me feet and bolt. In a flash I climb up into the cab and sit in the driver’s seat as my heart pounds in my chest. The driver tells me which lever to pull and which button to press. The arm comes into position and with a crash the back of the house crumbles before my eyes. Adrenaline courses through my veins as I open up the claw, grab the debris, swing it violently to the left and dump it in the bin with an almighty boom. More than anything, I needed to do that. I jump down out of the cab on a high and let the driver finish the job. For the next 10 hours I sit there, mesmerized, watching walls being smash, windows shatter and tin crumble before my eyes . Saying my good byes as the house gets taken away in the big bins comes easy. I can breathe again. I no longer have to look at the damage. All I see now is dirt and beautiful bush land. I can see where our new house will go, I can see our future. The fog has cleared and the pain has faded.

While standing there looking at the dirt Adam comes over and puts his arm around my shoulders pulling me in close so my head rests on his chest, “See I told you I’d make it happen.” His resourcefulness set us free. 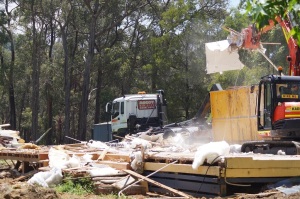 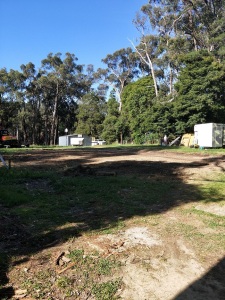 Published by Winds of change

Writing through changes in life. View all posts by Winds of change